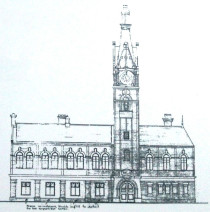 In 1897 March Urban District Council purchased the Market from the Lord of the manor for £800. The architect, Mr W T Unwin and the Surveyor prepared designs for a new Town Hall, Corn Exchange and Fire Engine Station. The building was pulled down in 1898 to start the construction of the new Town Hall which cost around £3000.

The ownership of the Town Hall was passed around a lot following the Local Government re-organisation in 1977. This saw the newly formed Fenland District Council take ownership who then sold the property onto Cambridgeshire County Council. The Town Hall was then transferred to the Lord Chancellor’s Department for use as a Magistrates court.

In 1998 the court was closed and moved to Wisbech which then led to Cambridgeshire County Council selling the building onto March Civic Trust for the benefit of the residents of March, thanks to generous contributions from Peter and Joan Skoulding and family.

In 2005, the March Civic Trust took out a major refurbishment which cost in the region of £600,000 to provide a wide range of facilities for the people of March and locally based charities. In appreciation of the Skoulding family’s contributions, the official hall of the building has been named in their honour, the Skoulding Suite. 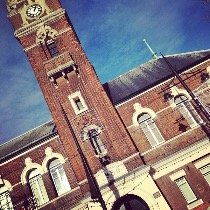 One of March’s most well known monuments is our Clock Tower! It was paid for by the people of March to mark the 60th year of the reign of Queen Victoria.

The clock was supplied by Sainsbury brothers for £112 and the bell was taken from the old market house/fire station which was used as a fire alarm as well as striking the hour.

The clock can go a whole week with just one winding and the variations in time-keeping are guaranteed not to exceed eight seconds per month.

The tower itself is 100 feet high and has five floors, giving access to the clock and former balcony on the third floor.