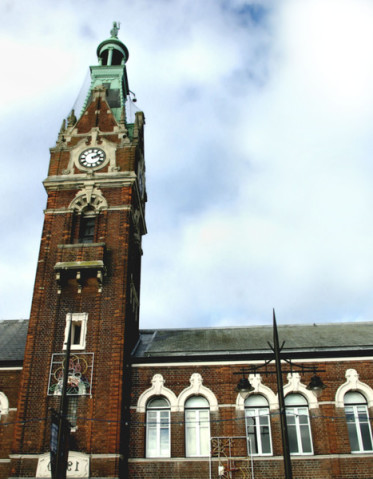 With a long history of trading, in the reign of Elizabeth I, March was a minor port. In 1566 eight boats, capable of carrying one, one and a half, or two cartloads, were used in the coal and grain trades. A certain amount of traffic in coal and other commodities, carried in barges, was observed by Dugdale in 1657.Local tradesmen's tokens of 1669, and a silver shilling token of 1811, have been noted.

Originally a market appears to have been held near the original town (then village) centre, on land beside The Causeway. A Market Cross (now called The Stone Cross) points towards the existence of an early market and this cross was erected in the early 16th century. This site was very near St Wendreda's Church.

In 1669 the town successfully petitioned King Charles II and in 1670 he granted the Lord of the Manor of Doddington a Royal Charter with the right to hold a market with two annual fairs, in spite of the opposition of Wisbech Corporation. This market was held on Fridays. The Lord of the Manor of Doddington, who owned a large part of March, gave special permission to the townspeople to sell their goods on some of his land in the town centre. This site, now called the Market Place, was then known as Bridge Green Common and later named Market Hill.

In 1785 the tolls were assessed at £6 per year. Soon after this the market appears to have lapsed, though the fairs continued to prosper. The development of the market was impeded by the lack of a covered hall and because market day in several neighbouring towns fell on the same day (Friday).

In 1807 the Vestry decided that it was not hygienic for goods to be loaded or unloaded in the vicinity of the market and ordered all saw pits, timber and other encroachments around the Market Place to be removed. The market was struggling during this time and an attempt to revive it in 1821 was not very successful. A Butter Cross, also known as a market house, was erected in 1831. This building also housed the town fire engine and had an upstairs room that for a time housed the Clock House School and later the Town Surveyor's Office. This office was covered by a turret which housed the Town Clock (purchased by public subscription about 1750) and the Fire Bell. In later refurbishments this clock was re-housed in St Peter's Church Tower. The Town Stocks were also placed in the Market Place and local offenders (and those who refused to go to church) were placed in them.

The want of a market house was remedied, in a makeshift fashion, by Sir Henry Peyton (who was the Lord of the Manor of Doddington). His building, however, was only 40 ft long (12 m) by 17 ft broad (5.2 m), and provided only 14 stalls under cover.

After the opening of the railway in 1847 another attempt was made to increase the market. In 1851 the market had been said to be "making progress"; and £150 was subscribed to give a treat to the poor at its reopening. The clash with other market days was solved in December 1856 by changing market day from Friday to Wednesday "by private arrangement and without any formalities". The tolls were, however, collected in an arbitrary and haphazard way; they were assessed for poor rate purposes at £10.

In 1872 the Board of Health bought a Shand and Mason fire engine that was the town's first steam appliance and was housed in the Market House. In the same year the vestry agreed to erect a urinal at the back of the Butter Cross for use by boys attending the Clock House School, but would not erect a water closet (toilet).

The market toll-keeper in 1888, though he had no fixed scale of charges and kept no record of receipts, was said to be taking about £50 a year. The success and prosperity of the market fluctuated over the years and an attempt by the Local Board to purchase the market rights to mark Queen Victoria's Golden Jubilee of 1887 was a failure. However in 1897 Sir Algernon Peyton agreed to sell the market rights, the Market Place and Market House to March Urban District Council for £800. At that time the market was leased to F. B. Phillips, who agreed to surrender his lease in 1898 subject to receiving the market tolls for one year without charge.

The building now known as March Town Hall was bought by the Skoulding family for the town of March and was handed over to the Civic Trust in 2003.  March Town Hall is now home to March Town Council, Panini's Coffee Shop, 20Twenty Productions, Isle of Ely Society for the Blind and March Talking Newspaper.

The Skoulding Suite is one of the main rooms of March Town Hall.  It facilitates meetings & conferences, theatre productions, live gigs, exhibitions and film showings and is available for hire.

The overall management of March Town Hall is overseen by the March Civic Trust and the hiring of the Skoulding Suite is co-ordinated by 20TwentyProductions, a local arts organisation.

Click here to find out more about booking an event.﻿